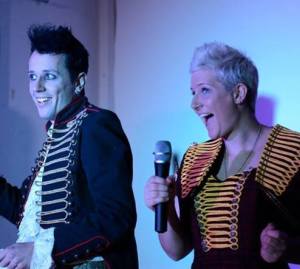 Each week the variety and vaudeville industry across Australia sees audience numbers around the 10’000 attend shows in all manner of venues across the country. As cabaret-circus fusion acts continues to be one of hottest selling, vaudeville entertainment genre in the country, theatres and clubs everywhere are on the hunt for the acts that draw in the big crowds! From small bars that present grass-roots acts to the State Theatres who continue to cash in on the craze by importing foreign variety acts, the industry is booming!

On Saturday night Speakeasy HQ will present a headline act unlike that has gained a HUGE name for itself through sheer hard work and being seen by literally thousands and thousands of people live. Performing on Saturday night as the headline act of our Oktoberfest show for the Speakeasy Fan Cartel the stars of the critically acclaimed ‘Papillon’, Idris and El Bella, will take to the Stage of the Stars! Having performed their show nationally together, and with more stage hours under their combined belts than almost any other duo or single artist in the industry today, Idris and El Bella between them are one of the most dynamic and sought after acts in the country!

But even still, after seeing them perform over a dozen times, describing their show is as difficult as describing the unique and individual shape of a single wave that hits the shore. Where a scripted musical, or opera, has a set choreography fro start to finish, where every word is the same in every show and all the songs and cues happen at all the same times, the performances given by Idris and El Bella could never be describes as anything other than unique on every single occasion. In what can only be described as a demonstration of years of performing for unpredictable audiences, live in street theatre and in diverse settings, the duo perform a style of show that simply cannot be duplicated in any context. Their energy, timing, grace and skill is unmatched, and then framed in a setting of elite skill, strength and agility to make show that is one of the must-see events in your lifetime!

Don’t miss your chance to see Idris and El Bella live at Speakeasy HQ as the headline act on Oktoberfest, 18th October 2015.

Ticketing is essential and available at: http://www.trybooking.com/Booking/BookingEventSummary.aspx?eid=87968